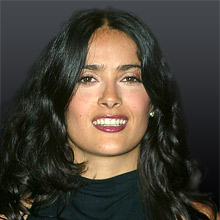 Actress Salma Hayek has confessed that she wanted to be a single parent and that she also thought of adoption before meeting her spouse businessman Francois-Henri Pinault.

"I was trying to figure out how to have a child on my own. I came to terms with saying, '(Love) might not happen, and I have to be okay with that'," femalefirst.co.uk has quoted actress as saying.

"Then someone came along whom I never would have pictured or thought I would have wanted. He was completely out of my box. Even though I was not looking, I was present and I was open. I am the luckiest person I know," the 45 year old said.

The couple got married in 2009. And they are parents of a daughter named Valentina.