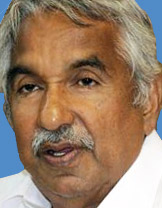 Irked with Additional Solicitor General (ASG) Harin Raval's Friday remark in the case of Italian Vessel confinement case, Kerala Chief Minister Oommen Chandy Saturday sought his removal from the case and asked to replace him by another senior government counsel.

ASG today appearing before the Supreme Court from the government side argued that Kerala government had jurisdiction to detain the Italian ship as firing from it took place outside India's territorial waters.

After this episode, Kerala CM made a complaint to union Law Minister Salman Khurshid seeking Rawal's replacement in the case through sending a fax.

In his letter, he reportedly complaint, 'We request the case should be handed over to the Attorney General and an inquiry be initiated to find out why a change in the stand was made by Raval when he appeared yesterday (Friday).'

Earlier, speaking to reporters on the sidelines of a party function, Chandy said the additional solicitor general's remark before the Supreme Court was contrary to the stand of the state government and that it as 'not the position of the state or centre'.

'We checked up with the central government and it has been found what he said in the court yesterday (Friday) was not the stand of the centre. The centre's stand is the same as to what we have taken,' Chandy said.

All hell broke loose Friday when Chandy and the state government came under fire from the opposition after Additional Solicitor General Harin Raval during a hearing in the apex court said that the state government had no jurisdiction to detain the Italian cargo ship as the firing from it took place outside the Indian territorial waters (20.5 nautical miles off the coast while Indian territory extends to only 12 nautical miles).

The Chandy next hearing of the case is scheduled for April 30.