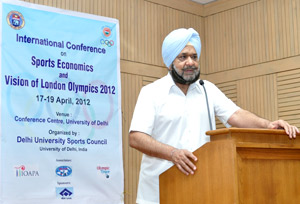 Keeping eye on the forthcoming London Olympic 2012, a conference organised for the importance to the economical aspect of the sports in Delhi University campus. Conference was aimed to disseminate the knowledge about sports economic and take the cognisance of our contry's stance in game.

On the occasion personalities highlighted that the sports being an integral part of everybody's life, it penetrates to the economy of country.

The conference was well responded by delegates from almost all part of the country and also from five other countries. Sh. D.D.Verma, Director General, SAI was the chief guest during inaugral session of the conference along with Prof. A.K.Uppal, Sr. Director, Sports, Amity University.

D.D.Verma in his speech assured the need for association with Delhi University for the scientific promotion of sports.

Prof. Uppal focussed on the requirement of more and more researches in the field of sports and concluded that research can only become the tool to increase medals in Olympic games. The conference is scheduled with thorough combination of Lectures, paper presentation, workshops and panel discussions.