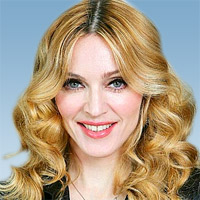 Singer and actress Madonna has expressed her desire to team up with Adele for future projects.

The 53 year old is a big fan of Adele and had planned to have her join the impressive line-up at the Super Bowl halftime show alongside Nicki Minaj, MIA and Cee Lo Green.

Answering to the questions on a TV show if she would work with the 'Rolling in the Deep' singer she said yes.

"Yes, I would love to. I would love to meet her, I think she's brilliant, I love her," the Daily Mail quoted her as telling ITV1's Daybreak and Lorraine.

"I wanted her to be in the Super Bowl with me, but I think she was having her throat problem or throat operation or something,"

The singer and actress also indicated that a stage performance between the pair could still happen at Hyde Park this summer where she will play a one off date.

The famed pop singer had defended the sensational singer when legendary fashion designer Karl Lagerfeld had dubbed her 'a little too fat', last month.