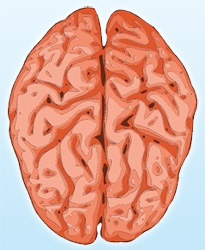 Amidst various studies on intelligence a team of researchers have identified a single gene, which may have a measurable effect on a person's brain size as well as intelligence.

There is not much debate regarding role of genes behind considerable variation in people's intelligence, but studies have continually failed to identify a single gene that has a significant impact. On the other hand, researchers usually find that hundreds of genes are responsible to this.

A large-scale genetics study based on fMRI brain scans and DNA samples from more than 20,000 people has revealed what is claimed as the biggest effect yet of a single gene on intelligence, but the impact is small as the gene changes IQ by only 1.29 points.

Some researcher believes that it basically proves that intelligence depends on the action of a number of genes.

"It seems like the biggest single-gene impact we know of that affects IQ," Paul Thompson of the University of California, Los Angeles, who led the collaboration of 207 researchers quoted has been quoted as saying in the New Scientist.

"But it's not a massive effect on IQ overall," he added.

This variant a gene called HMGA2, which has formerly been linked to people's height. At the site of the relevant mutation, the IQ difference depends on a change of a single DNA "letter" from C, standing for cytosine, to T, standing for thymine.

"C is the good one," Thompson said.

Besides boosting IQ by 1.29, it also improves the overall volume of the brain - but only by 0.58 per cent of average brain size, and thus adds around 9 cubic centimetres of tissue.

"It's a loss or gain of about 2 teaspoons," Thompson asserts.

It is the brain-size-altering effect of the gene that inspired the researchers to evaluate the impact on IQ.

The study was conducted on 21,151 adult, by taking into account DNA samples and scanning volunteer's brain. The researchers tried to find out differences either in the brain in general or in specific parts of the brain that includes hippocampus that is considered as the seat of memory and learning.

After establishing that HMGA2 influenced overall brain size, they looked deeper at a subset of 1642 volunteers from a twin study in Brisbane, Australia, who had undergone standard IQ tests.

Through this analysis researchers became able to find out the effect of the C on IQ.

People who inherit C-variants from both parents have double chances of effect, an increase in IQ to nearly 2.6.

"It's important they've found this gene, but it took a sample of 20,000 people to find it, precisely because the effect is so small," Robert Plomin at the Institute of Psychiatry in London, and lead author of a groundbreaking study in 2007 which failed to find any single genes of disproportionate importance in intelligence has been quoted as saying.

"If it's this hard to find an effect of just 1 per cent, what you're really showing is that the 'cup' is 99-per-cent empty," he added.

"It's an important finding, assuming it holds up," said Steven Pinker, an author and professor of neuropsychology at Harvard University.

Pinker said that the findings are first step towards showing that intelligence is based on numerous genes, and every gene has a small effect, rather than on single genes with moderate or big effects. But these genes are very rare so it has not been identified yet.