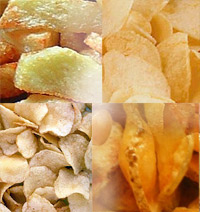 One third of women gorge on snacks when they find that no one is watching them, says a study done in Britain.

The researchers say that embarrassment about the types of food they are consuming as well as the amount they consume may be the reason for their secret habits.

"The odd snack here and there isn't a bad thing," Cathy Kapica, adjunct Professor of Nutrition at Tufts University in Massachusetts, and an adviser to the study has been has been quoted Daily Express as saying.

"In fact snacks can be an important part of a healthy eating style.

"Choosing snack foods that are nutritious and taste good may help alleviate the sense of guilt, and the need for secrecy around snacking.

"Switching to healthy snacks, or cutting down, would be much easier than trying to keep it secret.

"If you are snacking in secret, it probably means you are eating something you think you shouldn't be eating," she said.

The study was conducted on 2,000 Britons also observed that 40 per cent of women eat snacks secretly as their partner stop them from eating them.

A large number of women hide the snacks in the back of drawer or cupboard.