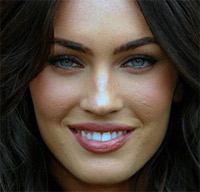 The tattoo on Megan Fox's back was edited from a magazine cover.

The star who debuted with Confessions of a Teenage Drama Queen posed for the cover of France's Grazia magazine.

Megan Fox has two tattoos, a Shakespeare King Lear quote, was shown in the picture, but another with a Nietzsche quote was airbrushed for the magazine cover, the Daily Mail says.

The image of Fox dressed in a revealing white and black racerback frock, shows off most of her back is printed on the cover of the magazine.

She smouldered for the camera as she put her right hand up, that displays a large white and gold ring.

The editors clearly didn't remove her Shakespeare tattoo that writes: "We will all laugh at gilded butterflies."

But they edited Fox's other tatoo, which quotes the German philosopher: "And those who were seen dancing were thought to be insane by those who could not hear the music."

This editing of image become worse as on the inside pages of the same edition of the magazine, the same shot of Megan is shown where tattoo is not removed..