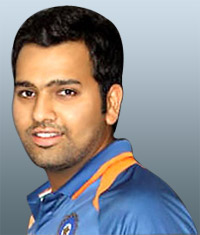 This Mumbai Hyderabad match of IPL 5 was full of drama and suspense. Viewers at Dr. Y.S. Rajasekhara Reddy ACA-VDCA Cricket Stadium, Visakhapatnam saw a flurry of big hits and dramatic fall of wickets. But Rohit Sharma was show stealer of the match when he hit the last ball for six snatching a possible victory from the Deccan chargers.

Chasing the small total Mumbai got off to a pathetic start and lost its both the openers for just ten runs. But Rayadu and Sharma consolidated the inning.

Undoubtedly Rohit Sharma was the show stealer of the match but Dale Steyn was also commendable who gave just 12 runs in 4 overs and picked up three important wickets.

For his fiery 73 runs off 50 balls Rohit Sharma was adjudged Man of the Match.