Obesity during pregnancy may affect brain development of premature infants 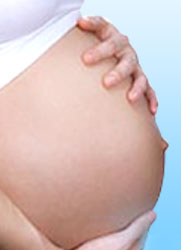 Obesity during pregnancy is not only harmful to mother's health, but can also cause cognitive impairment in extremely premature babies. Researchers at Wake Forest Baptist Medical Cente has discovered in a new study.

"Although in the past decade medical advances have improved the survival rate of babies born at less than seven months, they are still at very high risk for mental developmental delays compared with full-term infants," Jennifer Helderman, M.D., assistant professor of pediatrics at Wake Forest Baptist and lead author of the study has been quoted as saying.

"This study shows that obesity doesn't just affect the mother's health, but might also affect the development of the baby," she explained.

The study was conducted on 921 infants born before 28 weeks of gestation during 2002 to 2004 at 14 participating institutions.

In the course of study the researchers analyzed the babies' placenta for infection and other irregularities, interviewed the mothers and reviewed their medical records. They also reviewed the children's cognitive skills using the Mental Development Index (MDI) portion of the Bayley Scales of Infant Development of the children aged 2.

The researchers reached at the conclusion that both maternal obesity and lack of high school education were related to impaired early cognitive function, as was pre-term thrombosis (blood clot) in the placenta.

"We weren't really surprised by the socio-economic factors because it has been repeatedly shown that social disadvantage predicts worse infant outcomes," Helderman has been quoted as saying.

"However, obesity is of particular interest because it is becoming more prevalent and it is potentially modifiable during the pre-conception period and pregnancy," she added.

Obesity is associated to inflammation, and inflammation can affect the developing brain, Helderman stated. But it is still unclear that whether obesity-related inflammation in the mother is transmitted to the fetus.

Currently a study is being conducted by Helderman's colleague, Michael O'Shea, M.D., section head of neonatology at Wake Forest Baptist that follows these same babies into mid-childhood to determine long-term cognitive problems.

March issue of the journal Pediatrics has published this study.