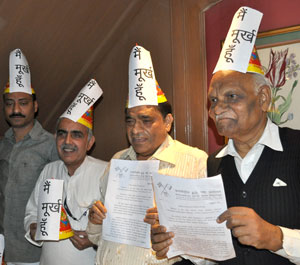 New Delhi, March 06, 2012: Though Holi is known to everyone in India for colors, Delhi also remembers it for the Murkh Sammelan, which is being held here for the last 30 years. Famous personalities are honored with this award on the Annual conference that is held on Fools Day on 8th March 2012.

This Sammelan will be held at Chandni Chowk on 8th March, falling on the same day as Holi. Though this year’s Sammelan will not see the march of the awardees on the back of the donkey said Sri Ram Prakash Gupt (Sanatan Chairman of the Sammelan).

A Kuldeep Gosain Memorial Award will also be bestowed to promote literature or art. It has been previously given to Shri Rajinder Awasthi (Secretary General Authors Guild of India), Shri Om Prakash Kezrial (CEO- Prasar Bharti) and many other respectable media people.

Publication Secretary of Sammelan said that Kanwar Kali, a magazine full of fun and humor would also be published on this day.

Many famous personalities of media, T.V. artists and literary figures will attend this Sammelan.