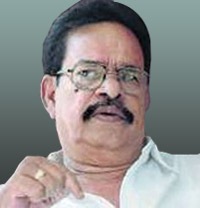 Well known Malayalam scriptwriter T. Damodaran, who scripted successful films like "Angaadi", "Ee Nadu" and "Avanazhi", died on Wednesday at his residence, according to family sources.

He was 77. The famous scriptwriter is survived by three daughters, including Deedi Damodaran, who is also an upcoming scriptwriter.

In his three decade long career he has penned nearly 50 Malayalam films.

This seasoned scriptwriter is given credit for having created the current superstars of Malayalam cinema - Mammootty, Mohanlal and Suresh Gopi. These actors owe their current status to Damodaran's scripts. Teamed up with master director I.V. Sasi and Priyadarshan in the 1980s and 1990s he wrote an array of commercially successful films.

Before taking to scriptwriting Damodaran worked as a physical education teacher at a school.