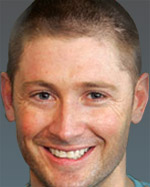 Australian captain Michael Clarke will replace the marquee player Yuvraj Singh for Pune Warrior's India in the Indian Premier League (IPL) current season. Clarke who is one of the world's best cricketers, his presence will be deciding for the Pune warrior's team.

Certainly the presence of Clarke in the Pune Warrior will boost the batting of the Sourav Ganguly as the marquee player Yuvraj is not present with the team. He was ruled out for the tournament owing to his recovery from lung cancer.

The Board of Control for Cricket in India (BCCI) had specially allowed Warriors to buy a foreign player to bolster the side in Yuvraj's absence.

Sushanto Roy, managing director Sahara Adventure Sports ltd said that we are thrilled to have Michael Clarke on board. The reigning Australian skipper is one of the world's best cricketers. His presence in the side, and cricketing proficiency, will boost our prospects in the competition.

IPL chairman Rajeev Shukla said that Clarke was exceptional in the recent Test series against India, as batsman and captain. He is a very popular cricketer in India, and followers of the sport are eagerly looking forward to his participation.

However Clarke will only be available after Australia's tour of the West Indies ending April 27. (With inputs from IANS)