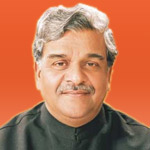 Union Coal minister Sri Prakash Jaiswal who has suddenly come into the limelight after exposing the alleged India's biggest scam worth Rs.10.67 lakh crore, on Monday said that CAG's observation were 'notional and imaginary'.

'Times of India', a leading English daily has revealed this alleged scam by publishing the 'leaked' report of Comptroller and Auditor General (CAG) of India, which was denied by the authority and the government.

Responding over the 'leaked' Comptroller and Auditor General's (CAG)'s report, Union Coal minister Sri Prakash Jaiswal has denied the CAG's 'draft' and said that since the inception of coal block allocation process, the process of allocation was open to all, and all competent companies were considered for allocation that have strong technical and financial ability.

On the contrary, ruling out Jaiswal's claim of 'CAG's observation was imaginary and notional' an anonymous senior CAG official said to a news agency that CAG's reorts were not works of imagination. There is an elaborate system of verifying facts.

After unearthing this alleged scam, Centre has once again come in the target of opposition, and the workings of Parliament houses were adjourned many times since then.

India is the world's third-largest coal reserve after USA and China and also the third producer of coal followed by China and USA.