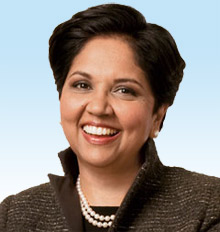 Indian borne PepsiCo's chairman and chief executive Indra Nooyi has achieved another mark and now she has received $ 17.1 million in compensation in 2011. This figure is 5.8 percent more than her package in 2010. The increase was driven largely by changes in the value of her retirement benefits at PepsiCo.

According to sources Nooyi's annual base salary was increased from $1.3 million to $1.6 million, effective February 2011. It was her first bump in base pay since her appointment as CEO. PepsiCo is undertaking a turnaround this year that will try to boost the company's performance, especially in its Americas beverage division where sales have been lacklustre.

Nooyi, 56, who has been the soft drink major's chief executive since 2006, got a 2011 annual incentive award of $2.5 million, 22 percent below her performance-based target. She got a 2011 long-term incentive award valued at $9.4 million.

It is noted that PepsiCo is slashing 8,700 jobs and boosting its marketing budget this year by up to $600 million that it will invest mostly behind a dozen global brands.

The beverage-and-snacks giant has also taken some steps lately to bolster its management bench and preparing for an eventual successor to Nooyi.

(With Inputs from IANS)