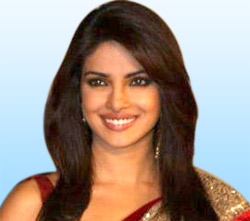 Priyanka Chopra has become the most glamorous diva by beating several highly popular Bollywood actresses in a contest organized by a TV channel in Mumbai.

The decision was taken on the basis of the ratings given to her by fans and the film fraternity.

"I am being crowned now, after Miss World and Miss India, I never thought I will go again into a pageant and be crowned, but it feels awesome and I almost for a second got as nervous as I was during Miss World and thank you so much for this," Priyanka has been quoted as saying.

The survey took into account all the aspects of personality that includes style, acting skills and fan following.

Her achievement is considered bigger as she made a place for herself in the Bollywood without having a godfather, which is essential for surviving here.

"Somebody like me, I am not from this industry, I started working when I was 17 years old, I came to Bombay with stars in my eyes and hoping that I could be the best and when your fans believe in you, it really feels that if I can do it, anyone can do it, because I am just like them. I am exactly who she is, she is a working girl and I am a working girl and you know it almost feels like a certain sense of acceptance," Priyanka said.

The contest 'Big Love Show' was held by television channel CBS where this former miss world was competing with top actresses of Bollywood for this title.