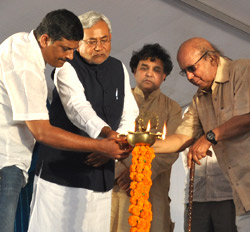 "Bihar diwas was not celebrated earlier but from the last few years we have decided to celebrate this day on March 22." Said the chief minister.

"People from Bihar go to earn their livelihood at different places of the country and abroad too and accept the place as their home without forgetting the culture of Bihar." He added.

While addressing to the crowd he said " Bihar has never been known as a commercial belt but it has always been known as centre of Knowledge from the ancient times." "The students from Bihar get top ranks in education whether it be Civil Services, IIT, Railways, UPSC and Medicals, our student are the most successful in every field making Bihar proud." He added.

He motivated the people of Bihar in Delhi by his inspiring speech and promised to make Bihar the model state of the country. A huge number of supporters were present at the occasion that was followed by many cultural programmes and great performances by famous artists of Bihar such as Subhashish Pathak and Vipin Mishra, Vijaya Bharti and famous bhojpuri singer Manoj Tiwari.

The Bihar Dewas is proud and status symbol for Biharis.The credit goes to our universe popular CM,Mr.Nitish Kumar,due to intiatives