Ayurveda should focus on its strength: Experts 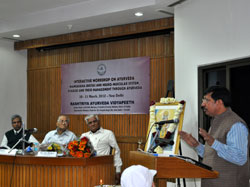 On the first day of two day interactive workshop on Ayurveda experts discussed various problems and opportunities before the Ayurveda. The workshops organized by Rashtriya Ayurveda Vidyapeeth discussed various issues including its theme 'Mamsavaha Srotas and Neuro-muscular System, Diseases and their management through Ayurveda'.

Speaking on this occasion Chief Guest Shri V.S. Gaur joint secretary to Government of India, Ministry of health and family welfare, Department of Ayush said that he has a firm belief in the healing powers of Ayurveda and he has seen the cases where ayurveda has offered relief where modern medicine has failed.

However, Mr Gaur advised the Ayurvedic practitioners to believe in their own potentials and not to compare Ayurveda with modern medicine, as Ayurveda is a complete science in itself.

Prof. D.G. Thatte, guest of honor shared his valuable experience with large number experts, scholars and participants present there. He also answered lots of questions raised by the participants.

Speaking on this occasions Dr. S. K. Mishra showed concern over deteriorating condition of Ayurvedic education in India and closing of a large number of Ayurvedic Medical Colleges in India. Addressing Dr. Mishra's concerns Mr Gaur said that the government has no intention to shut down Ayurvedic medical colleges, but his department only takes actions when colleges fails to fulfils criteria. He said that only colleges with insufficient infrastructure are prohibited from taking admission, as our aim is not to distribute degrees but produce able physicians. He emphasized that the department of Ayush has no dearth of funds for popularizing Ayurveda and if a good proposal comes the government will fund it. He said that the number of seminar on ayurveda should be increased.