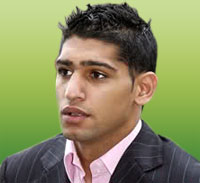 In previous month, Makhdoom took him around her native place in New York.

The couple was photographed beside Big Apple landmarks like the Statue of Liberty.

The couple also visited the gym Amir goes to, where she gave a knockout performance in the ring.

Makhdoom was left reeling when they braved the snow to take in Bolton's bus depot, the Sun reported.

"No wonder she can't wait to move here!" Amir said.

The ex- WBA and IBF light welterweight champion took his 20-year-old fiancee to lunch at his admired chip shop followed by a romantic stroll around the playground at nearby Queen's Park.

But Olympic boxing medallist scored at the Reebok Stadium, home to his heroes Bolton Wanderers and the venue of the couple's engagement party.