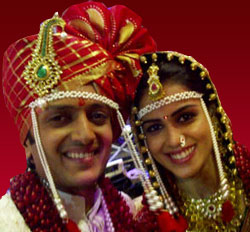 In a major Bollywood smash hit event, the much-awaited marriage between cute actor and son of Vilashrao Dekhmukh, Riteish Deshmukh and bubbly actress Genelia D'Souza was held on Friday with grand celebration. The eminent personalities of Bollywood industries and politics were present on this occasion.

The love story that started in 2003 during the shooting of their first film 'Tujhe Meri Kasam' got its final destination on February 3, 2012 when both the charming actors tied the knot for living 'happy married life'.

The marriage ceremony held in typical Maharashtrian style in the presence of family members and close friends of both actors at Hotel Grand Hyatt, Mumbai on Friday afternoon.

The barat (wedding procession) left from Ritesh's residence at Juhu in full blow at 11 am and were received by Genelia's family members at the venue and according to the scheduled muhurat (auspicious moment) the wedding began at 12.48 pm.

Pretty Genelia wearing Neeta Lulla's designer saree was looking awesome on this occasion while Riteish in quintessential sherwani was looking dashing on the stage. The couple's look was fascinating and charming on the ceremony.

Among the actresses Kajol, Asin, Jaya Bachchan, Amrita Rao, and Sophie Choudhary were seen on the site and were looking stunning in their traditional outfits.

After the wedding, a crunch ceremony has also been organized today for the couple.