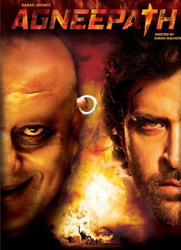 With the record first day collection of over 23 crores, Hrithik Roshan, Priyanka Chopra, Sanjay Dutt, and Rishi Kapoor starrer, Agneepath has proved to be pleasant new year gift for bollywood. The film has maintained its pace of collection with the four day earning of range of 62-64 crore (to be validated).

Though, the collection feel down by 40-45 percent in the second day as expected being Friday a working day. But the movie regained its pace on Sunday making the film a huge success in the starting of the year. The film has made a record overseas collection of huge $1.15 million during the opening weekend from the U.S. itself.

Directed by Karan Malhotra, Agneepath is the remake of Amitabh starrer Agneepath in 1990s and has shown a remarkable first week collection as expected. Moreover, the total release cost of the film was 72-75 crore of which more than half of the budget has already been recovered from satellite and audio rights and the film was predicted to be a big hit and the film truly lived to the expectations of critics.

Looking upon the huge response from the audience Priyanka Chopra, the leading actree of the film stated ''Agneepath has redefined the power of Indian box office for all of us. It's heartening to see the strength of the Indian cinema audiences growing like this. We all were very confident of the film but for this kind of success and unprecedented number that it has posted on day one we must thank our audience.''