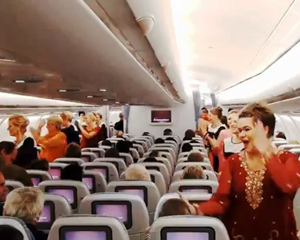 In a nice gesture, the Finnair showed its respect to Indian history and culture while congratulating all Indians on the occasion of Indian Republic Day on 26th January. Reportedly, a group of finish flight attendant goes Bollywood song and dance.

Certainly, it was a surprise for all the passengers of Helsinki-Delhi flight when its cabin crew, dressed in colorful attire started dancing to the tunes of popular Hindi film song "Deewangi Deewangi" from the movie "Om Shanti Om".

As informed by the airline itself, the whole surprising act was in commemoration to India's Republic Day celebration. According to reports, flight attendant Helena Kaartinen came up with this idea and brought together a few dozen flight attendants for a well-choreographed performance.

Ms. Kaartinen, who has been working in the airline since last 32 years, planned the whole thing with the help from a former flight attendant in Mumbai who is also happened to be a Bollywood instructor.

They all worked towards it and attended a routine dance practice twice a week for few weeks before bringing this act together inside the flight. The video of this performance went viral as soon as it first spotted on the popular video sharing website YouTube.

Hindu scholar and Indo-American statesman Rajan Zed, in a statement, applauded Finnair for this wonderful showing of respect, warmth and joy on India's 63rd Republic Day, depicting that they really cared and willing to go an extra mile.

On the other hand, the flight attendants said that it was good way to show respect and also to show Finnair's Indian passengers that they do care and know something about India.

While ad filmmakers and marketing people terms this as an interesting concept to score some PR points; in general, it can be said that despite the complexities of a consumer oriented society, big corporations should show that there is a humanity angle to everything and such little things are well enough to show that they really had heart and feelings for the customers instead of treating them just as statistics.

Just to conclude, Finns are very open-minded and friendly; it was natural for two gracious cultures to jell together. Then, the idea of mingling with a popular Bollywood number has more unifying impact and that too the song and dance, which share a global language and expression. This way, Finnair brought a smile on everyone's face.