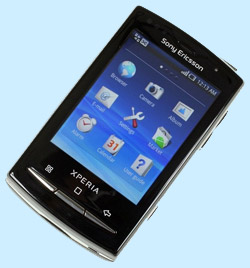 With the market filled with smartphones packed with modern technologies, Sony Ericsson is managing to bring out the phones that are less tech-savvy but marvellously designed. Xperia series of Sony Ericsson is famous for its beautiful look and slick design.

Even with the QWERTY keypad in the picture it still is surprisingly thin. It can rest in your palm and still you won't feel it. Even though it is small, Sony-Ericsson has placed almost the same hardware that is present in the higher versions of Xperia. Now that's quiet impressive!!!

Sony-Ericsson Xperia Mini Pro operates on Android (Gingerbread) operating system of v-2.3, which can be upgraded to v-4.0 in the near future, if needed. It has a built in Qualcomm MSM8255 Snapdragon chipset. It is backed by a 1 GHz Scorpion processor, which is quiet powerful. It also has an Adreno 205 GPU. It has an internal 512 MB RAM and storage space of 400MB, which can be extended up to 32GB.

Xperia Mini Pro has a LED-backlit LCD display made of scratch-resistant glass. Display supports 16M colours. It has a capacitive multi-touch screen. Sony Mobile BRAVIA Engine is used to give that extra muscle to Xperia Mini Pro.

Xperia Mini Pro has a dimension of 92 x 53 x 18 mm. Quiet sleek. And it weighs just 136 g. Xperia Mini Pro is toped with a 5 MP auto-focus front camera, which features Geo-tagging, image stabilization, smile and face detection and touch focus. Camera pictures can be enhanced by the use of LED flash. Video recording of up to 720p is also possible.

It has sensor like accelerometer, proximity and compass. It features Wi-Fi 802.11 b/g/n, DLNA with the hotspot facility, which means other Wi-Fi devices can use the Internet through our device. It can also connect to the other devices using Bluetooth of v2.1 with A2DP. It has the following output ports: USB v2.0 micro USB and a micro SD slot.

Standard Li-Ion 1200 mAh battery gives it the stand by power of up to 331 h and a talk-time of up to 6 h, which could have been improved considering the fact that even the smartphones now come with more battery back-up than this. It is available at the price of around Rs. 15,000.