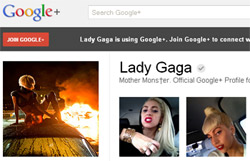 After claiming the top spot on Twitter and Facebook with maximum number of followers, Lady Gaga has now joined Google+. Since long, speculations have been doing the rounds regarding Lady Gaga joining the Google network.

A feature of the Google Plus, “Search Plus Your World”, is said to be the motivation behind Lady Gaga joining the Google+. In this feature, one can select a circle and he or she get to contact the people in that circle as well as celebrities who are from the same genre. Lady Gaga has joined the likes of Britney Spears and Snoop Dogg, who have already made their presence felt on Google+

Lady Gaga is a gifted performer and that can be judged from the fact that she has been playing piano from the age of four and wrote her first piano ballad when she was just thirteen years old. She had a humble beginning to her career when she recorded songs for an audio book with Grandmaster Melle Mel. She started a band afterwards, which reached its peak in 2006.

Lady Gaga became a rage among music lovers since her debut with the music album The Fame in 2008. People completely adored the songs like “Just Dance” and “Poker Face”, which topped the charts for weeks to come. The music and lyrics of the songs were much appreciated by the critics as well. Cashing on the album’s success, she released her second album The Fame Monster in 2009, which only reaffirmed her status as the latest pop sensation.

With her growing popularity, Lady Gaga went for a concert tour, Monster Ball Tour. The tour was a huge success and is named among the highest-grossing concert tours of all time. Lady Gaga’s musical exploits have won her five Grammy Awards and thirteen MTV Video Music Awards. She also has four Guinness World Records to her name.

Following closely on the heels of her idols like Madonna and the Queen, Lady Gaga has been able to make her own fashion statements, which are followed by the style-conscious women around the world.