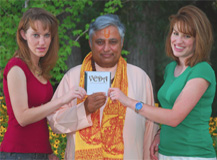 The only Sanskrit rock band of the world, "Shanti Shanti", has come up with a groundbreaking new album on the oldest scripture of the world Vedas, and they presented the first copy to the acclaimed Hindu leader Rajan Zed in Nevada (USA) today.

This CD titled "Veda", produced by Ganesha Publishing BMI, contains shlokas (hymns) from all four Vedas—Rig-veda, Sama-veda, Atharva-veda, and Yajur-veda, some as old as 1,500 BCE. With extensive research and selection process, it took one year to complete this CD, which is their sixth album.

"Shanti Shanti" consists of American sisters Andrea Devi Forman and Sara Anjuli Forman, their younger brother Micah Mahdev Forman and father Robert Henry Forman. The Formans have never been to India, never had a Sanskrit teacher, and still Andrea and Sara can spontaneously chant, read, write, and translate Sanskrit since they were nine and seven years old respectively.

Devoted Catholics, Andrea and Sara have also translated and chanted Ave Maria, a traditional Christian prayer, in Sanskrit. They have toured various countries and various states of USA giving packed Sanskrit musical performances. They have been in various television shows, mentioned in various publications, and extensively written about.

"We fell in love with the overwhelming stillness, exuberance, clarity and amplified sensory awareness of Sanskrit poetry which we have attempted to share with you in this record," Andrea and Sara stress.

Youth, specially of India and those living in foreign countries coming from India background, need to learn from the example of Forman sisters who have mastered ancient language Sanskrit (also known as "the language of the gods") and are promoting it in a big way on their own inspiration, living in a non-Sanskrit environment and coming from a heritage with no Sanskrit background, Zed points out.

Andrea and Sara thanked Rajan Zed, who is president of Universal Society of Hinduism, for blessings, encouragement and guidance, while presenting him with the first copy of the new album.