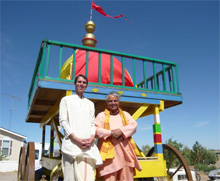 Hindu leader Rajan Zed blessed the rath (chariot) with Gayatri and other mantras and Gangajal on Monday before it entered world famous Burning Man festival in Nevada desert in USA where tickets per person cost $295 and where it will be used daily for Rath Yatra (chariot procession).

There will be a Krishna Camp complete with a 40-foot high Jagannath Temple in Oriya style architecture housing life-size deities of Jagannath (a form of Krishna), Baladeva (Krishna's brother), and Subhadra (Krishna's sister) imported from Puri in India at the weeklong Burning Man festival, which opened Monday. About 40 thousand participants gather annually to create Black Rock City in Nevada desert, about 127 miles from Reno, dedicated to self-expression, self-reliance, and art as the center of community, and leave one week later, having left no trace.

Rasikananda Das, Assistant Director of Krishna Camp, says that devotees of Lord Krishna from around the world have helped set-up this Camp, which will house about seventy people and would cost them about $60,000. Krishna (Krsna) is the eighth incarnation of Vishnu, the all-pervader deity in Hinduism, and traditional history places him around 3000 BCE.

Rath Yatra will be held everyday of the festival complete with dancing to the Kirtan (devotional singing) tunes. About 1,000 people are expected to participate in the actual procession daily, which will be watched enroute by about 35,000 people, when it goes around the temporary Black Rock City, travelling about two miles. Leaving the Camp at six pm daily, the Lord's chariot will return home at 12 midnight after passing through the streets of the desert city, Rasikananda adds.

Chaitanya Das, Camp resident, says that free hot and cold chai (Indian tea) will be available round-the-clock for the visitors to Krishna Camp. Indian delicacies like samosas, jalebis, gulab-jamuns, pooris, pakoras, paranthas, etc., will be cooked fresh everyday at Krishna Camp—the playhouse of Lord Jagannath. Krishna and Radha (Krishna's consort) will be reunited through a complete marriage ceremony at the Camp. Festival participants are welcome to get married in traditional Hindu style at the Camp. Temple priests will also give Sanskrit names to seekers.

A marathon mantra-chanting day will be held at the Camp, which includes chanting "Hare Krishna" mahamantra (great mantra) for continuous 24 hours.

Besides no meat/fish/eggs, other restrictions at Krishna Camp are no sex, no gambling, and no liquor, although the Burning Man festival does not prohibit these.

Zed, who is the president of Universal Society of Hinduism, has congratulated the organisers for this Rath Yatra and urged the communities in other cities of USA, Canada and the West to organise Rath Yatras in their respective cities to create awareness about ancient Indian culture and Hinduism, which is the oldest and third largest religion of the world with about one billion followers.