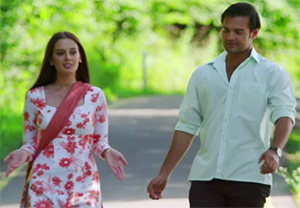 Mumbai, May 4, 2015: The song track 'Das Dae' from the upcoming movie 'Ishqedarriyaan' release on the Youtube.

The makers of 'Ishqedarriyaan' have released yet another song from the film called Das Dae. The track is sung by the talented Mohit Chauhan and has music by Jaidev Kumar. The lyrics of the song are given by Kumaar. The song boasts of some soulful music and beautiful lyrics that is sure to strike a chord with all the romantics.

Fall in Love with the Soulful Track Das Dae from 'Ishqedarriyaan', the upcoming Hindi movie to be released on May 15, 2015.

The video of the song manages to bring out the complicated love triangle between the three actors, Mahaakshay Chakraborty, Evelyn Sharma and Mohit Dutta in the film. We see a love struck Mimoh cherish the moments spent with his lady love in the film, Evelyn Sharma where as the pretty actress seems to be in awe of the character of Mohit Dutta.

Watch the video at: