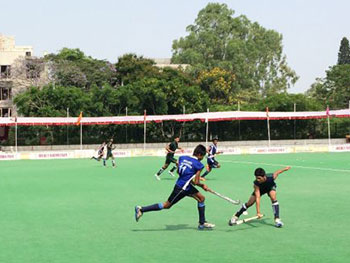 Mysore (Karnataka), 3 April 2015: With the teams marking their respective wins, on the third day, the ground of Mysore witnessed exciting clashes at the 5th edition of the Hockey India Junior Men National Hockey Championship 2015 in Mysore, Karnataka.

An exciting third day of hockey was witnessed during the 5th edition of the Hockey India Junior Men National Hockey Championship 2015 (Div B).

The day started with a fast paced exciting contest between Hockey Bihar and Hockey Gangpur-Odisha where, the latter started its campaign on a winning note and beat the former 7-1 in the Pool D match. With both teams looking at opening the scorecard it was Hockey Bihar who took the initial lead in the 8thminute through Sukhram Mundu. Trailing the match Hockey Gangpur-Odisha came back strong and drew level immediately as they scored the equaliser goal in the 10th minute as Rasananda Khalkho's field goal took the score to 1-1. Continuing their aggressive play, Hockey Gangpur Odisha score again in the 17thminute as Sanjay Xalxo stroked a field goal. The team earned a penalty corner which was perfectly converted by Pratap lakra in the 29th minute and taking the score to taking the score 3-1. Adding the second goal to his personal tally, Rasananda Khalkho notched another field goal in the 32nd minute taking the lead to 4-1. Sanjay Xalxo displayed a wonderful stick work and added three consecutive goals to his name in the 34th, 53rd and 60th minute, escalating the scores to 7-1. The game ended with a win for Hockey Gangpur- Odisha against Hockey Bihar 7-1.

Registering its first win in another Pool D match, Assam Hockey defeated Hockey Rajasthan 6-4 in a close tie today. The game saw its first two goals in favour of Assam Hockey where Harvir Singh beautifully converted the penalty corners in the 6th and 10th minute taking immediate lead of 2-0 in the game. Assam Hockey's Sontosh Gour gave the third goal to his team in the 17th minute through a field work taking the lead to 3-0. Without wasting much time, Hockey Rajasthan retaliated in the very next minute and scored the opening goal through Shoyab Alam in the 18th minute followed by another beautiful field goal by Kripal Singh in the 20th minute. Hockey Rajasthan started mounting pressure to equalise scores 3-3 through Naresh Yogi scoring in 25th minute. With game on, Hockey Rajasthan took the lead to 4-3, as Kripal Singh scored another field goal in the 27th minute. Entering in the second session of the game, Assam Hockey scored an equaliser in 37th minute through the stick of Harvir Singh. To end the game on a high note, Assam Hockey scored two field goals penetrated by Pankaj Basumatari and Arjun Bhagat in the 46th and 61st minute respectively declaring a win for Assam Hockey over Hockey Rajasthan 6-4.

Results of the Day-