New poster of Ishqedarriyaan is released 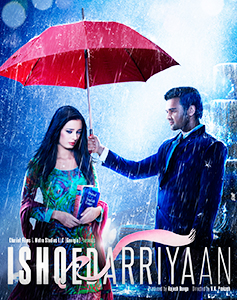 The chemistry between the two actors is beautifully displayed, with the poster featuring them sharing a moment aptly displaying Mahaakshay's character's undying love for Evelyn's character. It shows the two actors standing in the rain, with Mahaakshay trying to protect his ladylove - a shy Evelyn Sharma - by shielding her with an umbrella.